Remember how the left has been screaming about  CLIMATE CHANGE and how it’s going to kill us all and melt the poles by 2015 and kill all the polar bears by 2020?

Of course you do, you can’t miss it.  It’s on every leftist news program every other day.

There’s just one little inconvenient truth that the left has forgotten to tell you.

The planet stopped warming 10 years ago and they can’t explain it.

Think I’m lying?  Think I’m spouting the Faux News rightist lies?  Think I’m an idiot?  Well think what you want but I have facts on my side.

Here’s the graph the left likes you to look at. 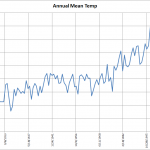 Median Temperature over the Last 110 Years.

Looks pretty damning doesn’t it?  Looks like they are right and the earth is headed toward hellfire and damnation (although they don’t believe in hell or damnation).

But look at a graph of the last 10 years.

Well look at that!  The average temp over the last 10 years has been pretty stable.  The temperature hasn’t been going up.  It’s flatlined.  In fact if you plot just the last 7 years it’s actually gone down.  But the left won’t tell you that.  It doesn’t help their story.

Don’t get me wrong.  I’m not actually suggesting that the earth is not going to get warmer and the poles aren’t going to melt and the polar bears aren’t going to all die.  The earth has been warming and cooling for millions, nay billions of years.  What I am suggesting is the left has been lying to you and they keep lying to you.  Just look at Politifact.com and the Lie of the Year if you have any doubts that the left lies.

What I do want you to do is think for yourself and get the data for yourself.  Don’t rely on MSNBC or Fox News to get your data.  They both have agendas and neither one is really looking out for you.

I got the data from these plots here if anyone wants to check it out.

This entry was posted in Life, Politics. Bookmark the permalink.